Le Bernardin chef Eric Ripert is known for his way with fish. But after knowing him for almost 20 years — God help us both — I can tell you that his desert-island food is chocolate. Whether nibbling leftover Valentine’s Day truffles from La Maison du Chocolat at home in the morning, sneaking fèves of Valrhona from the pastry kitchen at the restaurant, or working through the stash of Eclat bars in his office in lieu of a 3 o’clock coffee, chocolate is his one daily constant. “I don’t have breakfast. I have chocolate,” he told me.

But it can’t be just any chocolate. It must be dark — no more than 72%, he says — and complex, without added vanilla or sugar. The texture must be snappy; the mouthfeel creamy but not too cocoa-buttery. He found his ideal chocolate an hour outside of Philadelphia, of all places. There, Christopher Curtin makes incredible bars and truffles using single-origin beans, some made from a rare — as in 20 trees left in the world — albino cacao in Peru. Eric and I were working on a project in 2010, just as he and Anthony Bourdain were developing an addictive, nib-studded bar with Eclat called Good & Evil. For me, evil had it: I found myself breaking off tastes of the limited samples whenever Eric left his office, and cadging and stockpiling bars after its release.

I don’t know if it’s inappropriate because of #metoo, but this chocolate is more…masculine.

That chocolate is still my ideal, but I’ve rarely brought myself to order the $12.95 bars, available exclusively through Williams-Sonoma. I’m rarely without a few single origin bars from SF-based Dandelion Chocolate in the cupboard (I’m partial to beans from Madagascar for their floral, red-fruit notes), but so many bean-to-bar chocolate makers have entered the field — even in the year since I judged the chocolate category for the Good Food Awards — it seemed crazy not to explore. So I invited Eric over for a blind tasting.

To source almost all of the 10 bars, I went to The Meadow, which sells chocolate, salt, flowers, and cocktail bitters. (They’ve heard all the Portlandia jokes: They’re from Portland.) Former Le Bernardin pastry chef Michael Laiskonis, who’s now the creative director at the Institute of Culinary Education — where he teaches chocolate-making classes for amateurs — dropped off some of his newest confections, including one made with brown butter and maple. And for fun, Manresa chef David Kinch, to whom Eric introduced me back in, like…Jesus, never mind…sent a box of jazzy bonbons from a chocolate pop-up he’d just done.

We tasted them blind, clearing our palates with nutty soba-cha (buckwheat tea) from Brooklyn’s Kettl, while our friend Melanie Dunea — who shot part of On the Line, which Eric and I did together — captured our increasingly caffeinated judging. Eric’s palate is so fine-tuned, he could detect too much vanilla in one; aggressive acidity in another; a perfect fermentation technique with just the right texture, etc. He was getting notes that I never even registered. (Of his second favorite, he said, “I don’t know if it’s inappropriate because of #metoo, but this one is more…masculine.”)

Afterwards, we sampled the fancy filled chocolates from Manresa (the pretzel + olive oil!!!), then had a knock-down lunch at King, with a bottle of Domaine Hauvette to take that cacao edge off. And, of course, all of the desserts. 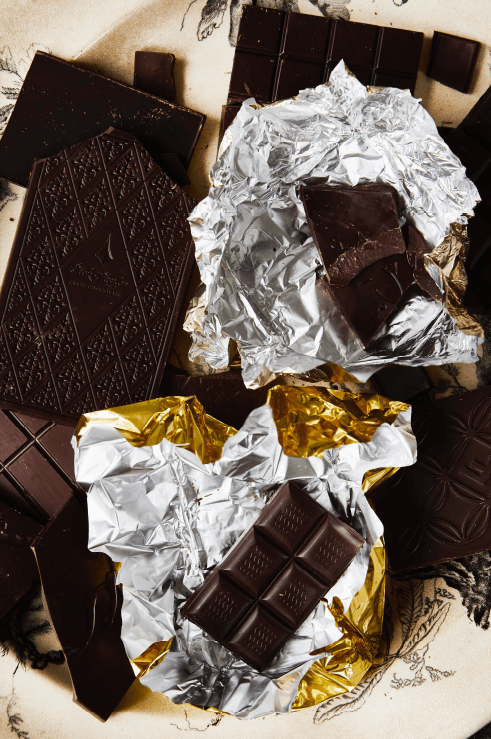 (And if you want to know what not to buy, Marou and Dick Taylor were the least favorite.)