Maira Kalman has built a career — and a life — upon delight. The artist, illustrator and author can transform her fascination with a grammar guide found at a yard sale into an opera staged at the New York Public Library, or install her late mother’s closet in the Met with her son, Alex, bringing people to joyful tears with big white underwear and inflatable globes. She can publish books of images of girls standing on lawns, or dog poets in Paris, or Thomas Jefferson. Or…weather. Because she always finds what is lovely and true, majestic and absurd in the everyday.

Her latest release, Cake, is a cookbook. But, in true Maira fashion, her bittersweet watercolors don’t correspond to her friend Barbara Scott-Goodman’s recipes. She just wanted to paint pastries. And who are the people at Penguin Press to say no in the face of such pleasure and expertise? We should all be so lucky to get to this point in our careers.

When I invited myself and our mutual friend, photography consultant Luise Stauss, to Maira’s West Village apartment to bake from her new book, she couldn’t refuse: This is a woman who meets her best friend three mornings a week to walk in Central Park…then straight to Bouchon Bakery for pastries. (In fact, she’d picked up some cream puffs that morning in case her olive oil cake didn’t work out.)

I believe that all dreams can come true if you just blab about it. Talk to the women — that’s what I always say.

I asked questions as we mixed and measured the very easy cake, which Scott- Goodman had adapted from a favorite at Maialino. Maira added some raspberries to the pan for prettiness before pouring in the olive-y batter. (I’d brought a bottle from McEvoy Ranch, a U.S. favorite. I tend to hoard the stuff I’ve scored from Sicilian winemakers Frank Cornilessen and Arianna Occhipinti.) The three of us sat down to tea and conversation while it baked, and again after it came out of the oven, by which time I’d picked up my son from school around the corner and Maira had set him up in her granddaughter’s room, beneath a giant poster from Jacques Tati’s Mon Oncle, a film that brilliantly combines slapstick and design — much like Maira’s own work.

Enough with the filler! Here is Maira in her own wise words.

Xtine: When do you bake?

Maira Kalman: I bake for special occasions, like [my granddaughter] Olive’s second birthday. My partner Rick and I made the roulade of Jacques Pépin, and we made double, so it filled the whole table. Very simple! Not trying to make the log shape, or elves…

Have you had baking disasters?Trying from a cookbook and being, like, “I don’t have any of these ingredients, but I do have some shoes and some socks….”

What did you do?I made the cake, and then I made it again. Failure is ever-present. Disaster ‘R’ Us. And that’s okay. 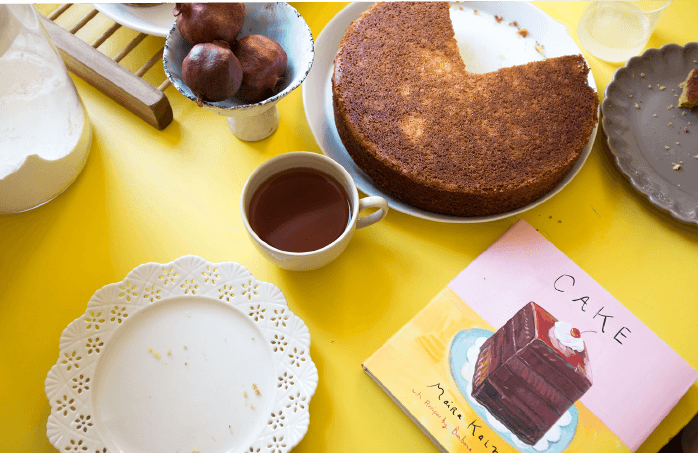 What’s the gracious way to behave when you brought the cake and you don’t realize it’s terrible until it’s too late?Merriment and then on to the next. You know what Julia Child said: Never make excuses.

For years you were obsessed with being a maid for the Duchess of Devonshire. That dream came true, and you spent time working alongside the staff at her grandson’s house in Ireland, which happens to be available for rent. How did you make it happen?I believe that all dreams can come true if you just blab about it. Talk to the women — that’s what I always say. That’s how I found my Proust group. It takes a few years. It’s not instant gratification.

I’m interested in the idea of your being able to bring your ideas to life fully formed. But it sounds like that might just be my perception…In the same sense of how The Elements of Style happened – I saw it at a yard sale, brought it home and went, Wow, this would make a good book. Then I’m seeing the words and thinking, Ooh, this would make a good opera. Even my mother’s closet – that sense of standing in her closet when she died and thinking, This is going to be an exhibit, OBVIOUSLY. Any idiot would know that! I think that everybody has it, but I think maybe I listen to it — when I say something like that, I FEEL it from head to toe and I KNOW that it has to happen.
So it took me two to get the rights to The Elements of Style — it didn’t happen overnight. It took 10 years after my mother died [to organize the closet exhibition], and then it was at Alex’s museum, and then it took the curator another two, at least, to get it to the Met. The recipe is, you have to have an idea and you have to be very patient. This idea might happen 10 years later than I thought it would. But they happen in some form. It’s the same thing with dancing with John Heginbotham. I always thought Pina Bausch would call me and say, “Get over here. We’re waiting for you, Dancy Maira!” And it didn’t happen. But John comes along and says, “Let’s do a ballet.” 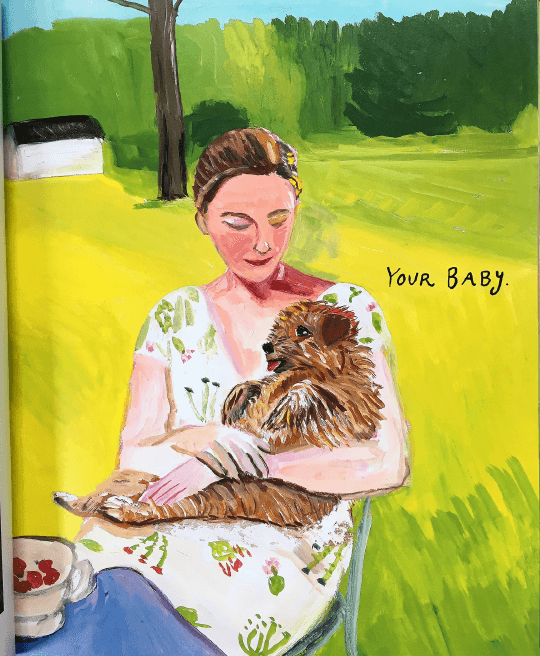 What’s your work rhythm?I work between naps. You know, the deadline is a beautiful thing: It gets done because it has to get done.

It’s nice that you and Rick [Meyerowitz] don’t live together, so you can putter at will.“Nice” doesn’t even begin to cover it.

I’m starting to think that’s the answer to a happy partnership.I think it’s an incredible thing. It’s not something I would have chosen in the earlier part of my life. I was very happy to live with Tibor [Kalman, her late husband]. But to see the NEED I have for solitude is palpable. It’s not, “It’s nice,” it’s essential. It’s critical. I really believe that my happiest moments are when I’m alone. Being with [my children and grandchild], I adore them, but that sense of yourself in your own place, doing your work or living your life. And I don’t think it’s about the other person. It’s about that it’s a really extraordinary gift to be able to enjoy the solitude — and not be lonely. The opposite. It’s nice to be needed, but there’s an advantage to not being needed.

I was thinking about doing a section on the site called “Just the Tip.” That one piece of advice…The only thing you can say is: Never stop doing your work, because that’s going to keep you grounded and give your life purpose, even if you think, Ugh, this is such a drag. Spend as much time as you can with people that you love. And walk a lot! 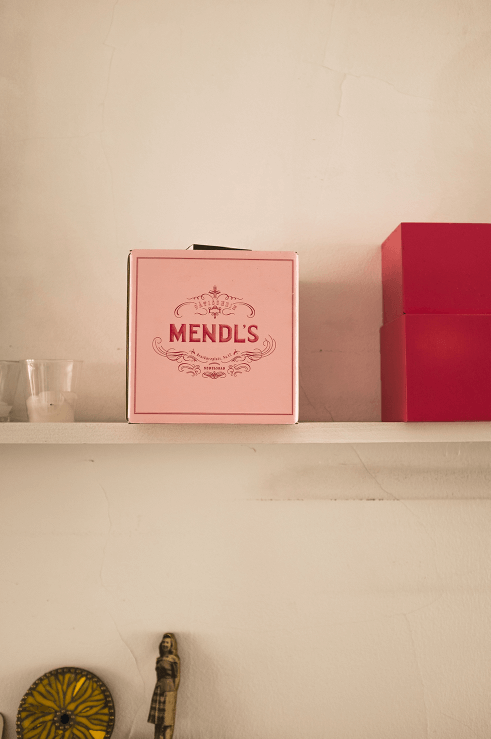 Rich and aromatic olive oil cake is a classic and there are many versions of it. The cake is a snap to make and there is no need to use a mixer or food processor. It’s simply a blend of flour, sugar, and other dry ingredients whisked together with eggs and olive oil. It can be made with regular or extra-virgin olive oil and flavored with orange and lemon. This recipe, made with orange juice, orange zest, and Grand Marnier, is adapted from Maialino, the lovely restaurant on Gramercy Park in New York. Plan to make it ahead of time—because it tastes great and a little boozy after two or three days.

Reprinted with permission from Cake by Maira Kalman (Penguin Press, 2018).